The source code for this document can be found here.

This document is about how Layers work in Zircon. If you want to learn about how to perform simple drawing operations instead take a look at the page about tile graphics here.

A Layer is a specialized TileGraphics object which can be drawn upon a Layerable object. A Layer differs from a TileGraphics in the way it is handled. It can be repositioned relative to its parent while a TileGraphics cannot. Both Layers and TileGraphics are in-memory objects which are drawn only when the underlying Layerable object is drawn. Another important difference is that when a TileGraphics is drawn it is a copy operation (it won’t change the graphics itself), while a Layer is placed over other Layers and the TileGrid. Zircon supports transparency, which means that all Layers are visible.

Both the TileGrid and the Screen interfaces implement Layerable so you can add Layers on top of both of them.

Layers are pushed from bottom to top (like a stack) and you can either pop a Layer (which will remove the last added Layer) or remove one by its reference (like when you use a Set):

After running this code you’ll see this on your screen: 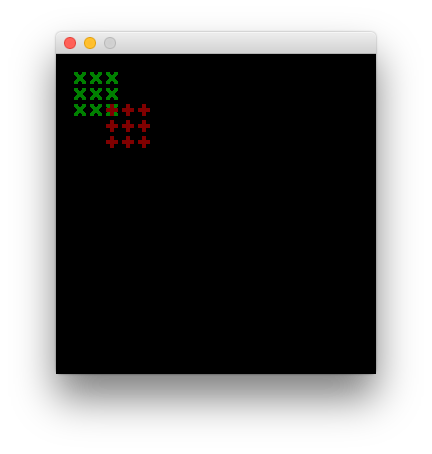 Note that in the above example all objects are created by using the corresponding factory methods in Layer, DrawSurfaces and Tile. This is a common pattern in Zircon and you should use these Builders for creating all Zircon objects. Read about The design philosophy behind Zircon for more info.

When drawing either a TileGrid or a Screen, Layers are drawn on the screen from bottom to top. You can also see layering as adding a 3rd dimension (depth, or z axis) to a two dimensional surface.

When adding a Layer to a Layerable you must supply a Position to it which is relative to its parent.

Layers can hold Tiles which have transparent colors (like in the example above) so keep this in mind when you push Layers onto a Layerable.

Changes in your Layers (like their position) is automatically handled and visible on the screen.

You can move a Layer to a new Position by using the moveTo method without removing it from its parent.

Do you have questions? Ask us on our Discord Server.

If you like what we do and want to support us consider becoming a Patron.